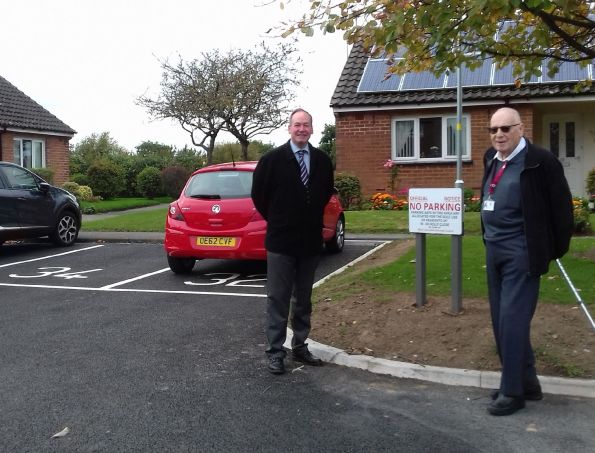 Residents in Westhead are benefiting from extra parking spaces after the ward councillors worked with residents to persuade the Borough Council to take action.

Council tenants in the bungalows on Holly Close had very limited parking previously. As a result, on-street parking meant that access for emergency vehicles and council bin wagons was compromised.

After residents first raised the matter with Our West Lancashire Councillor Adrian Owens, he took the matter up with council officers and the Borough Council has now constructed 10 additional parking spaces which has resolved the access and parking problems.

Cllr Owens said “I’d like to thank the portfolio holder, Cllr Forshaw for her support. She immediately understood the problem and took the project forward.”

Cllr Davis, who lives in the village himself (pictured above with Cllr Owens in Holly Close) said, “This project has taken longer to be completed than we had initially hoped, but I’ve kept a close eye on its progress since becoming a councillor and I’m delighted that this project has come to fruition. It makes the everyday task of using the car much less stressful and hazardous for everyone living in that part of Holly Close.”