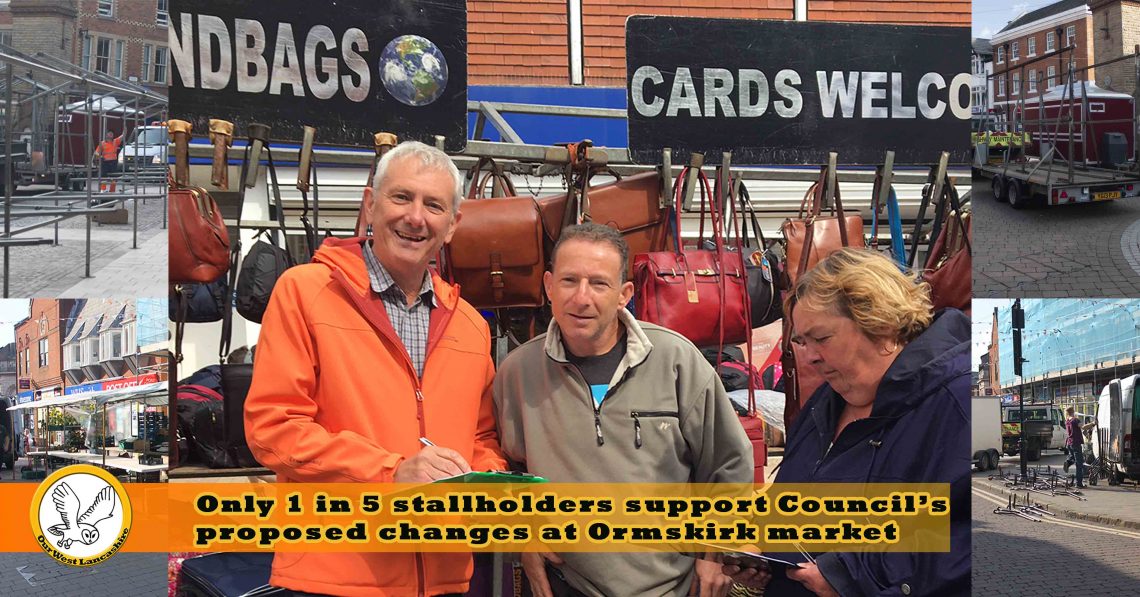 A survey of stallholders by council Independents, Our West Lancashire has revealed that only 1 in 5 market stallholders support the Labour council’s proposed changes at Ormskirk market. The survey also showed that several traders will cease trading at the market if the changes come into effect. Stallholders also voiced widespread criticism of the council’s consultation process and raised concerns about the effect the changes would have on health and safety; new entrants to the market and its appearance.

Cllr Jane Thompson said, “During the survey, stallholders were telling me that the council consultation was nothing of the sort. They were just told that these changes would happen. Although they have received a letter, many traders complained that the council has not spoken to them about the changes even though the council has a market superintendent present every market day.

“A lot of the traders, even those that were happy with the changes, were concerned about ‘high winds’ and the proposal to use more gazebos at the market. They are not as strong as the Council erected stalls and will ‘blow away’ in high winds. Indeed, whilst we were conducting the survey on Thursday there were strong gusts of wind and some traders with their own gazebos had fastened them to the strong council stalls to make them more stable. These council stalls won’t be there from April.”

“A few traders come to the market by car on their own. There is no way they can carry and erect their stall. They were clear that they would leave the market at the end of March when the changes are due to come in. The council urgently need to talk with these traders, not issue dictats.”

Our West Lancashire also say that there were concerns expressed about the appearance of the market following the changes and new traders being deterred from trialling their ideas by the high costs of buying their own stall. Where gazebos are used at neighbouring markets such as Chorley they are often still owned and installed by the council with consistent branding.

Cllr Ian Rigby who helped with the market survey and also sits on the council’s Audit and Governance committee said that he would continue to pursue discrepancies in the market finances reported to councillors. “The report that went to the Labour cabinet stated the market ran at an £84,000 deficit yet the approved accounts for 2018/19 show a deficit of only £37,000. I have been waiting almost a month for an explanation of this discrepancy and now intend to ask for an even more detailed breakdown of income and expenditure figures.”