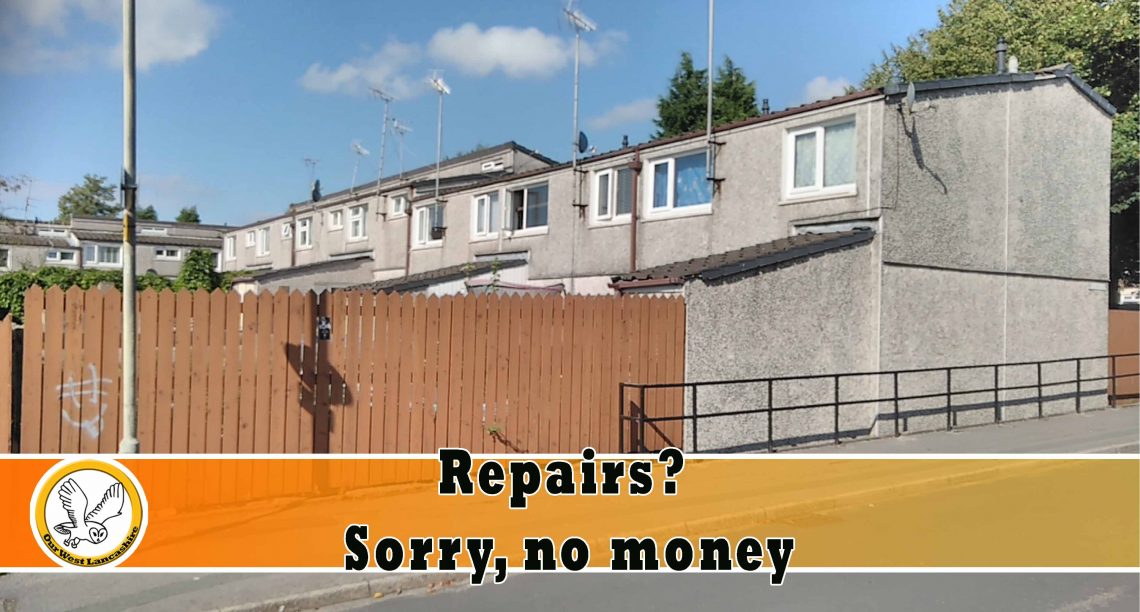 Our West Lancashire have renewed their call for increased investment to better insulate and improve energy efficiency after being contacted by tenants in Birch Green frustrated at the lack of action from the council.

Cllr Adrian Owens, OWL Group Chairman who met tenants in Birch Green recently to hear their concerns said, “Tenants are now turning to Our West Lancashire in frustration at the lack of action from the council.  Rents from council tenants generate a surplus of more than £4.5 million every year.  Yet currently all that money is going on Labour’s rush to build on much of Skelmersdale’s green space.”

Birch Green resident, Sandra Porter said, “I have been trying to get the rendering addressed on houses in Flimby for more than 12 months and the only response you get is that there is no money, yet there’s money for new building schemes in the town.  There is no insulation in the walls of our homes and the rendering is falling off.  The houses are cold and heating bills are high.  The council should check its priorities.”

Cllr Owens said he recognised the problem Ms Porter faced in getting any action from the council.  “I was promised a report in April, yet I’m still waiting.  Staff that are supposed to be working on this have been moved to other work.  The truth is council officers have been given no money by Labour to address these problems on our housing estates.  Almost all the multi-million surplus from the rent monies paid by existing tenants is being diverted into Tawd Valley Developments to build new homes, not to address the problems in the homes of existing tenants.”

He continued, “The Council has declared a climate change emergency and for many of our residents fuel costs are a significant cost.  Greater Manchester is embarked on an ambitious retrofitting programme on their council homes.  In West Lancashire, we are still in the starting blocks. Investment in energy efficiency improvements to tenants’ homes would reduce carbon emissions and tenant fuel bills, leaving more money in hard-pressed pockets.  The works themselves would provide a jobs boost locally as the economy recovers after the pandemic.”

The Council Independents have also repeated their call for a start to work on a third revival project in Skelmersdale.  Cllr Owens who was involved in the success of previous revivals at Firbeck and Beechtrees said, “Revival projects are complex because of the mix of privately owned and council owned properties.  However, we mustn’t give up on putting right the worst features of the New Town layouts.  Giving homes their own private outdoor space and more traditional street layouts has been a great success at Firbeck and Beechtrees.  The council needs to starting planning the next one.”